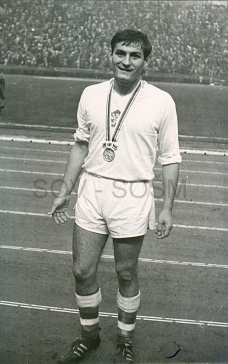 The native of Vrútky was the founder of a noticeable family football dynasty. He personally can show off a silver Olympic medal (at the Olympic Games1964 in Tokio, the player of Inter Slovnaft Bratislava played all six matches). A reliable middle defender played 17 matches in the Olympic all-star team and he got an opportunity to play in the A-team of the Czechoslovak Socialist Republic three times. In 1958, he changed from Vrútky for ČH (Red Star) Bratislava. He started in the reserve team and gradually he was moved to the first team, where Buberník, Kačáni and Mráz took the lead and dragged the team led by couch Borhy to the Championship. When ČH Bratislava club actually won it, Weiss was just 19 and he was the youngest in the champion cadre. In the highest competition, he played 236 matches and scored six goals. Afterwards, he became a coach, he led smaller clubs: Trnávka, Rapid Bratislava, Slovenský Grob, Pezinok and Limbach, since being a widower, he took care after two children and he was unable to go farther from home. Diabetes left its mark on his onward life, he had a hereditary predisposition to it, he lost part of his leg and he secluded himself in Limbach.