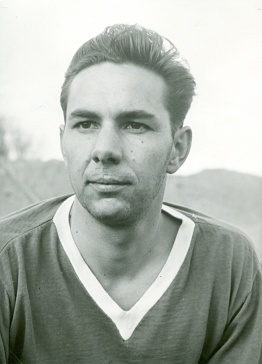 Together with captain Urban , the defensive centre Štefan Matlák was the oldest out of the Slovak party in the team, he was 30 already at the time of the Olympic Games in Tokyo. His career declined at that tie. He entered just one match in Tokyo, but played seven matches already in the Olympian team and netted two goals. He entered three times in A-team of the Czechoslovak Socialist Republic and netted one goal. He combined his football life with Červená hviezda Bratislava. He took the ČSR Championship in 1959 in its colours and he triumphed in Rappan Cup two times (1962, 1963). In 2003, he took over the silver circles of the Slovak Olympic Committe.