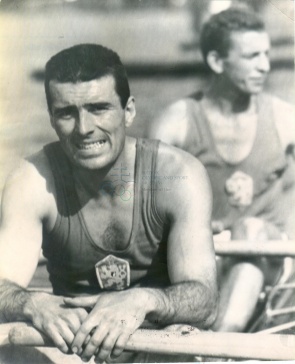 In the history, he is recorded as the only Olympic winner in rowing from Slovakia. He achieved the greatest successes in rowing only after he completed the university studies of psychology in Bratislava and entered the military service in 1958 in Dukla Terezín. Here, he persuaded an excellent sculler Václav Kozák, younger by six years, to try it with him in double sculls. Two years later, the couple won the Olympic gold at the Lake Albano. After the occupation of Czechoslovakia by the military forces of Warsaw Pact, he decided for emigration to Switzerland. There, he established the sports school, where he devoted himself to the education of coaches and acted as a psychologist. After a certain time, he took care after the Olympic preparation of Swiss sportsmen too and he opened up the psychiatric practice. The Slovak Olympic Committee reminds his memory since 2005 by awarding the annual Prize of Pavel Schmidt, the prize for the performance of the year in an individual Olympic discipline.