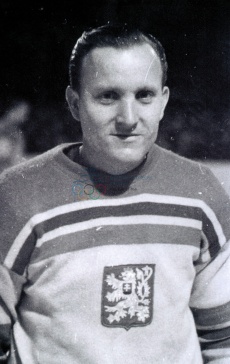 The Košice native, Ladislav Troják, entered the history as the first Slovak ice hockey player, who started at the Winter Olympic Games. He started the great ice hockey career in his native town as the player of ČsŠK Košice (till 1934), but he fully developed his art of play to the top level in the team of LTC Prague. In 1947, he enjoyed the historical achievement in the for of the World Championship at the World Championship in Prague - as the only one Slovak. Six players from the Czechoslovak Republic, including Troják, flew to the preparatory matches to London on 8 November 1948. The rest of the team flew to Paris one day earlier, but six players were late since they waited for English visa. Their airplane disappeared without a trace in a dense mist somewhere above La Manche Channel. The old ice stadium in Košice bore the name of Ladislav Troják and the new Steel Arena bears it as well. Sixfold participant in the World Championship, twofold Olympian and World Champion put on the national team dress of the Czechoslovak Republic in 75 matches, where he shot 37 goals.