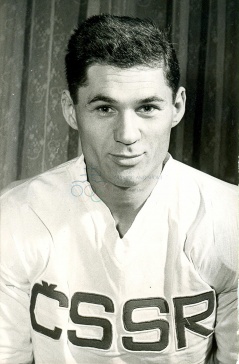 The well-built defensive back played 47 matches in the national team of the Czechoslovak Socialist Republic. Immediately after his debut at the the World Championship in 1961, he enjoyed silver and also the European Championship. In 1963, he won a bronze medal at the World Championship and he brought both Olympic and World bronze from Innsbruck in 1964. In the league competition, he played for Slovak Bratislava, Dukla Jihlava and VSŽ Košice in 480 matches and he shot 77 goals. He ended his playership in second league Martin, where he acted also as a coach and Ice Hockey  Club Secretary. In 2004, he became the member of the Slovak Ice Hockey Hall of Fame.