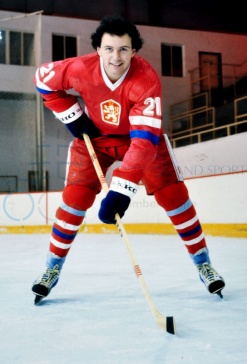 He played 196 matches in the Czechoslovak team and netted 69 goals. In Sarajevo, he contributed to the gaining of silver Olympic medal, he played all seven matches during the Olympic tournament, he shot one goal and assisted three times. In Calgary, he individually asserted himself much distinctively, with 11 points from 8 matches (six goals and five assistances), he became fourth the most productive player of the Olympic tournament. Dušan Pašek was among the first our players who got the chance to legally play in the overseas NHL (1988/89 Minnesota North Stars).