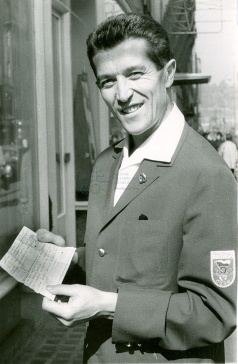 The best Slovak volleyball player of the 20th century played in the national team of Czechoslovakia for 13 years. In addition the Olympic medals, he took also two World Championships (1956, 1966) and the European Championship (1958). At the Olympiad in Mexico City, he was favoured with being the colour-bearer of the Czechoslovak expedition at the ceremonial opening of the Olympic Games. After the termination of his carrier, he devoted himself to coaching and he acted as the college lecturer at the Department of Games of the Faculty of Physical Education and Sports of the Comenius University in Bratislava.  He became a distinguished sports official – the Vice-president of the Slovak Central Committee of the Czechoslovak Sports Association  (SÚV ČSZTV), the member of the presidency of the Czechoslovak Olympic Committee.  As second Slovak in history – after figure skating coach Hilda Múdra – he was awarded the Pierre de Coubertin Medal by the International Olympic Committee in 2006.